I believe that I have (or should have) the right to kill an intruder in my house to protect myself from injury (and not just serious injury).

Those statements may appear to be contradictory. I believe they are consistent. This post explains why I think that.

(I am a paid-up member of Liberty, the human rights organisation. But these views are my own).

For example, article 2, the right to life: “Everyone’s right to life shall be protected by law”. But if you choose to stand in front of a train, there is no point in appealing to article 2. You would be better off getting out of the way. You have a right to life, but that right may not keep you alive by itself.

Or article 12, the right to marry: “Men and women of marriageable age have the right to marry and to found a family”. But it’s your responsibility to find a suitable willing person, and you need to have sex and be fertile. Your right doesn’t automatically lead to the desired conclusion.

And so it is with intruders versus householders. They both have rights, but they both may need to do something to satisfy their right to life.

The DPP has published a reasonably clear assisted suicide policy, for example for cases where a person ended their life at Dignitas. The equivalent guidelines for self-defence, Self-Defence and the Prevention of Crime, are far less clear, and much more open to interpretation. Yet they apply to a situation where seconds count! This situation has been tested in court, and precedents have been established. But faced with an intruder, I wouldn’t be able to examine those precedents! To have any hope of not freezing (and perhaps dying), I would need extremely simple “rules” that I have thought about in advance.

Here is my attempt to deduce what simple guidelines should be, based on cases in recent years. I can spot some clear “don’t do these”, but I can’t properly deduce the “do these”. To keep things simple (which is essential), the decisions are based on: “inside or outside the house” and “intruder advancing or retreating”. 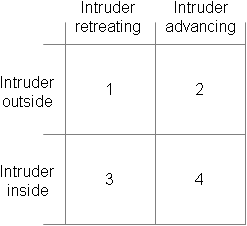 1. Outside the house, intruder retreating

This is now well established: leave well alone. (But presumably go into the house and call the police).

2. Outside the house, intruder advancing

Leave the intruder alone, get into the house if it is safe to do so, lock the door, and call the police. If that is not safe or possible, treat this like “Inside the house, intruder approaching”.

3. Inside the house, intruder retreating

Leave alone, but be prepared for a change in direction by the intruder.

4. Inside the house, intruder advancing

Do whatever is thought necessary to stop the intruder advancing.

Every continued advance should be assumed to be strong evidence of malicious intent, and obviously increases the intruder’s options for committing harm. Every retreat by the householder reduces the householder’s future options, and obviously escalates the personal risk of serious injury or death. The intruder must stop advancing or be stopped. (A pause by the intruder is ambiguous, and may precede either an advance or a retreat).

The intruder is like the person standing in front of a train, and the householder is the train. The intruder has the right to stay alive by getting out of the way.

Here is some reading, but it leaves me confused. As an engineer, I am used to precision and unambiguity in specifications. The law here appears to be made by people who are prepared to judge others post hoc according to fuzzy principles.

What is “such force as is reasonable”? How does someone unskilled in self-defence decide what that is in a second or two? It isn’t sufficient for the householder to honestly believe it is reasonable. The jury will make a separate decision, using the concept of a “reasonable man”. What is a “reasonable man”? Have I ever met such a person?

Is this some sort of game involving “fair play”, where I have to accept a risk of a broken arm if the only alternative is to kill the intruder? Why should I have to accept even a bruise? I suspect that if I killed someone rather than accept a minor injury, I would be prosecuted. But I simply can’t see any logic or aspect of ethics or human rights that would insist on that. A principle is “force used must bear proportionate relationship to threat”, for example “cannot respond to fists with gun”. Why not? Why should I have to risk injury by using my fists when I could only avoid the risk of injury by using a weapon? (I would stand no chance in a fight with an average man using equal physical resources such as fists).

This isn’t a game where two people are participating after agreeing to such rules. It is a one-sided situation where one person could have decided to avoid injury to both of them, and the other has been left with no acceptable choice.

I think that my guidelines above would mostly be thought reasonable. But the statement “Do whatever is thought necessary to stop the intruder advancing” might be questioned.

4,694 Responses to “The human rights of intruders”