I follow Hemant Mehta, the Friendly Atheist, for good reason. He recently posted Shocking: Young Americans Have a More Favorable View of Atheists Than Senior Citizens Do, drawing attention to an important survey (What It Means to Be American: Attitudes in an Increasingly Diverse America Ten Years After 9/11) which showed increased acceptance of atheists in the USA.

His post concentrated on the attitude towards atheists. But the diagram he used shows much more: 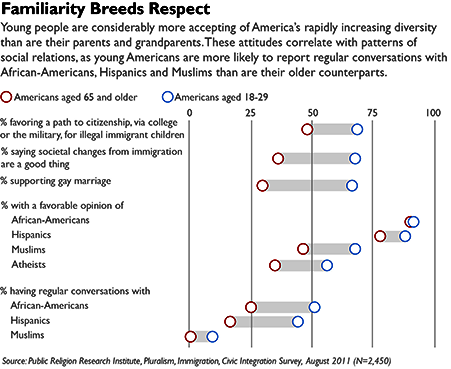 This isn’t merely about attitude towards atheists. This is about Enlightenment. The younger generation is more Enlightened that the older one.

We are engaged in a war for enlightenment, being fought over generations.
And we are winning some battles!

The War for Enlightenment

I’ve described what I mean by “enlightenment”, and about this “war” as I see it, at the posts below and on my main website. I won’t repeat them here.

I suspect that what the diagram shows is primarily about the “Empathy” dimension:

Summary: Attitudes and views towards other beings, human or otherwise.

The trend towards having a more favourable opinion of atheists (in the way shown in the diagram) is helped not just by having regular conversations with them. It is helped even by knowing they exist! See Atheists – stand up and be counted! Some extracts: