This summarises about 5 articles on Christianity that I published before I created this blog. (However, many other sections of about 30 pages on the topic “gods and religions” are also about Christianity).

Jesus was not a Christian. He was born a Jew, lived as a Jew, had Jewish disciples, taught as a Jew, was executed by the Romans for claims about his being the ‘king of the Jews’, and he died a Jew. Christianity is not a religion preached by Jesus; it is a religion about Jesus, and especially about his death.

Why did Jesus die?

“I would say that if you don’t believe that Jesus of Nazareth was the Christ and Messiah, and that he rose again from the dead and by his sacrifice our sins are forgiven, you’re really not in any meaningful sense a Christian.”

The simple version was:  “Adam and Eve sinned. Their offspring inherited their sin. Someone had to die for this sin. So Jesus died on the cross as a penalty or atonement to save us all from inherited sin”.

But “modern” Christians don’t believe Adam and Eve actually existed! (I’m not discussing the lunatic fringe such as Creationists). So Adam and Eve couldn’t sin. So there never was such inherited sin. So there is no need for atonement, no basis for the concept of a “son of god”, and no need for a church to aid atonement. Besides, why can’t a god capable of creating a whole universe simply achieve the same end by dictat?

So: Why did Jesus die? And why do Christians celebrate such a ghastly death?
(Some even claim to eat his flesh and drink his blood each week! Do they acknowledge being cannibals?)

Objectionable behaviour by some Christians in the UK

Objectionable Christian behaviour in the UK

But it was a Christian campaign (the Keep Sunday Special campaign) that provided my first “wake up call”. I suddenly realised that people whose beliefs I didn’t share were trying to make me conform to their rules! Christianity and Islam are currently both among the forces that I believe are most objectionable in the UK.

I want Christians to act on the basis that Christianity is a hobby,
deserving no rights or privileges or special considerations other than those available to other hobbies.

The Roman Catholic Church is a morally-incompetent organisation masquerading as a moral authority. 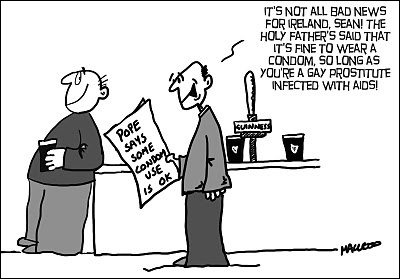 The main reasons why the world would be better without the Roman Catholic Church include:

The policy and lies about condoms which are killing vast numbers numbers of people from AIDS.

The restrictions on women’s reproductive rights, which are devastating in the developing world as well as unreasonable and unenlightened in the developed world.

The unenlightened, irrational, attitude towards LBGT people, who typically behave according to their true nature without harm to others.

The rape, beating, and other abuse of children, and the subsequent cover-up activities which deny justice and closure to the victims.

Blogs about the Roman Catholic Church from “Child Support Analysis”

I maintained a blog about topics related to child support from 2003-2006. Priests failing to pay child support for their children, and the Roman Catholic Church’s attitude towards condoms, were included.

Blogs about the Roman Catholic Church from “Child Support Analysis”

These show some bizarre and objectionable behaviour from the Church’s hierarchy that has been over-shadowed by more recent news about child abuse and cover-ups.

Christianity is not a coherent and consistent philosophy or set of beliefs. Knowing that someone is a Christian enables very few predictions  to be made about that person.

Christianity is perhaps best thought of as a “brand”, with its famous (sinister) logo, and a sort of loose franchise built around these. Each franchise-outlet may then go its own way.

This means that individual Christians may not see themselves in anything I’ve said here, and feel offended. But they must recognise that they may be in a minority among Christians.