This is prompted by Julian Baggini’s article “‘You just don’t understand my religion’ is not good enough” in the Guardian. That article was about typical objections that religious people have towards criticisms of their religion, and also their typical leaps of illogic.

Whether or not their intention is to obscure their god to protect their concept of him from scrutiny, arguing with obscure statements about a god is pretty futile. The goal-posts will keep shifting. Their god may start as “whatever was needed to cause the universe to exist”, and end up (without any logic whatsoever) as the God who had a son called Jesus, or Allah who originated the Koran. 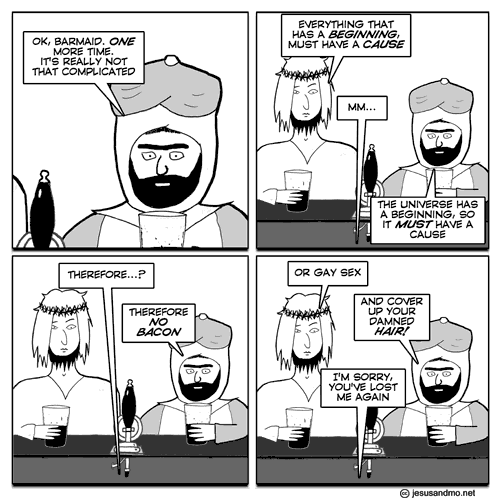 I prefer to keep things simple. Here are my main themes that I try to bring the discussion back to:

This keeps any particular “god” out of the equation. I’m not saying there that I don’t believe in any god (although that is actually the case). I am arguing for the total irrelevance of any gods.

I can’t prove the truth of any of my beliefs. But obviously no-one has been able to prove that they are untrue. In theory it could be done – they are “falsifiable”. But they haven’t been falsified, even after all this time.

772 Responses to “When people make their god obscure, simplify things”