Reminder 2: blame must not be attached to an “accident of birth”, and belonging to a baby boom is such an accident. And there is no implication that the people of any baby boom did anything wrong that helped cause the housing crisis.

Although the birth rate of the post-war generation hasn’t unduly influenced governments to favour this generation, it surely had an impact on the housing crisis faced by young people today.

The percentage of people born before 1955 who own houses has peaked, and may be declining. And they are gradually dying and releasing their houses for younger people. So their percentage of the gross housing wealth is relentlessly reducing from 45%.

The percentage of people in the 1955-1974 baby boom who own houses is still increasing, and probably their proportion of the gross housing wealth is increasing from 43%.

The population according to birth date

(This article is illustrated by various graphs. Rather than break the discussion flow with details, the sources and explanations for these graphs are provided at “More about these graphs – sources, etc” towards the end of this article. They come from plausible sources).

All graphs in this article have a variant of the following graph as their background (sometimes using 2009 rather than 2011 data). This is not exactly the same as the birth rate because many of the original older people have since died. 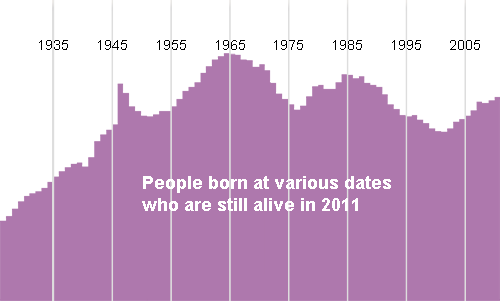 2011 population breakdown according to birth dates

One very obvious fact from this graph is that there wasn’t a 1945-1965 baby boom, nor is the immediate-post-war 10-year cohort the one with the potential to put most pressure on the housing market. This graph should also raise questions such as “are the problems of younger people partly because there was a mini baby boom from about 1978 to about 1992?” Can future trends in the housing market be partly predicted from this graph? Will the apparent current mini baby boom cause housing problems in 20 or 30 years time?

This graph shows in blue the gross housing wealth owned in 2009 by various 10-year cohorts.: 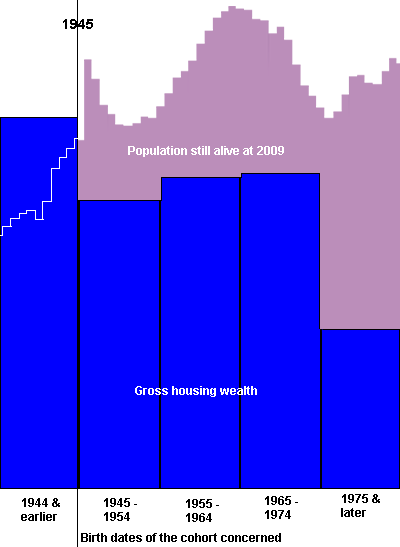 The housing wealth should be interpreted in the context of the population graph. In the first decade after the war there was a “baby pop” from about 1946 to 1948, then the birth rate dropped to what has become a more normal post-war base level. So the housing wealth of the 1945-1954 cohort isn’t as high as the later cohorts. From about 1955 to about 1974 there was a “baby boom” which has resulted in the next two 10-year cohorts each being higher than the housing wealth of any 10-year cohort before or since. (The exaggerated height of the “1944 & earlier” column on the graph is simply the result of combining a number of decades of people. It doesn’t represent just one 10-year cohort).

Why is the younger population (aged 37 or less) struggling in comparison? There must have been houses available for the three 10-year cohorts from 1945 to 1974. In fact the gross housing wealth of the 1965-1974 cohort is slightly higher than the 1955-1964 cohort, despite being younger. Presumably there wasn’t a severe shortage of houses available when they wanted one.

What changed after that? Did they simply use up nearly all the available houses, and too few have been built since then? Another factor is that there was a lower-level baby-boom from about 1978 to about 1992 which will obviously put pressure on the housing market.

The next graph shows total mortgage values, to the same scale. 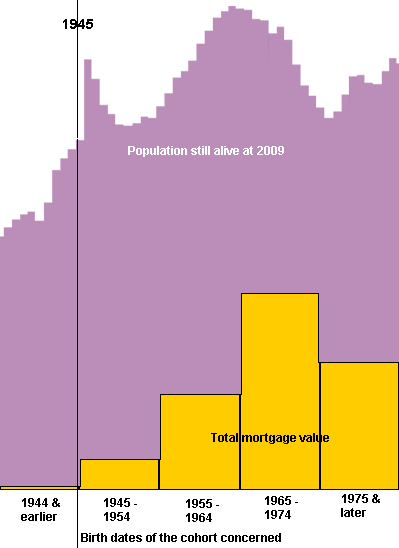 The older you are, the more chance you have had to pay off part or all of your mortgage, and obviously this is a priority for people near retirement. I don’t see a puzzle here.

This graph helps answer questions such as “what proportion of each age-group owns their own house?” and “what are the trends on house-ownership in each cohort?” The different coloured columns represent surveys taken about a decade apart, blue about 3 decades ago, then red, then yellow, and green recently. 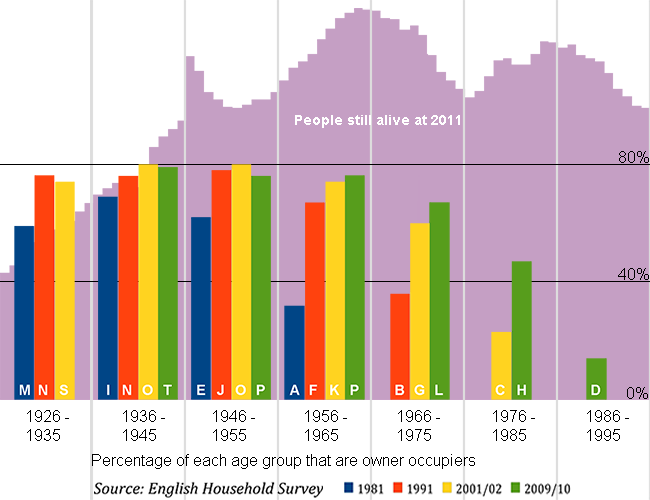 Percentages of house ownership of cohorts at different times

There are 2 sorts of changes happening over time: older people are dying, and the percentages of each cohort who own houses is changing.

There is no indication that people born before 1956 are increasing their house ownership. Indeed, it is possible that after peaking at up to 80% the percentages are declining, see the first 3 cohorts in the graph. Are some of these people selling their houses, and if so why? Are they moving into managed housing or long term care?

It is clear that people born after 1955 are increasing their house ownership, although the 1956-1965 cohort appears to be peaking at perhaps the 80% level of older cohorts. It might increase from the current 21.5% of the gross housing wealth to about 22% or so.

It is too soon to predict the future percentages of people born after 1975. There is a consensus elsewhere that they are tending to start later, but there is no indication of whether they too will eventually reach about 80%, or more or less than this. (My guess would be less).

The housing problems of younger people are often expressed in terms of their typical ages. But they should be expressed inter alia in terms of the average time since the end of full time education. In 1965, the average end of full time education was a little over 15, while nowadays it is about 19. This would be expected to increase the average “first-house age” by nearly 4 years over that time. It isn’t valid to be concerned about the higher “first-house ages” of younger people without accounting for such factors.

More about these graphs – sources, etc

All of these graphs and the various numbers quoted here are based on  the following:

The population according to birth date

It is easy to get the graph for any date in the range at Office of National Statistics: “Age structure of United Kingdom 1971-2085“.

I used just the “Female” half of the graph, and rotated it, added dates and legends, etc. This makes little difference to the graph; it slightly exaggerates the number of older people because women tend to live longer than men. It makes no difference to the conclusions.

I described in The myth of a baby-boom-led housing crisis how I derived the original graphs from David Willets’ book. “Gross housing wealth” is the value of the “bricks and mortar”. It is different from the number of houses owned.

Here I’ve done little more than tweak the presentation of the original graphs and reverse them left to right.

I started with the “English Household Survey” graph, (taken from “Hoarding of Housing: The intergenerational crisis in the housing market“), which showed trends for different cohorts at the same age range. (For example, people aged 25-34 were compared at 4 different decades). To make it clear what is going on, I first simply labeled the 24 columns in the original graph with letters A to X: 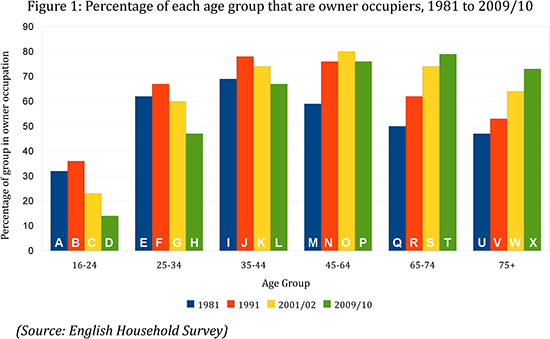 Then I re-ordered the columns to cluster the different surveys of each cohort together, so that trends within each cohort over time could be seen. Unfortunately the “MNOP” columns cover 2 decades, not 1. So I duplicated them, to use separately for each decade in turn. This means that any of the “MNOP” columns may be slightly too high in one use and slightly too low in the other use. I don’t have the data to know whether this has happened, so I couldn’t correct for it.  The only column where I think this might matter is “P”, and so it might influence whether the older cohorts are tending towards lower house ownership.

When I mapped the columns onto cohorts I forced them to consistently fit decades by sometimes varying the start and/or end year by one. This would not influence any conclusion.