There is a commonly-held (but erroneous) view that:

To examine this, here are populations-graphs for the years when each of the last 6 Prime Ministers first took office. (I’ve included estimates for the expected 2015 and 2020 elections too!)

Imagine that you were one of these candidates seeking to become Prime Minister:

Which population group(s) do you have to attract (or appease) in order to win?
Is there any group whose votes will decide the election so you can risk other group(s) to get those votes?
Which age-range(s) do you need to attract?

James Callaghan in Wikipedia. Born in 1912. Came to office in 1976. Never elected to office.

(All diagrams in this article use the female half of the Population Pyramid. This slightly exaggerates the size of older groups because on average women have longer lives. All graphs have linear Y-axis with origin zero so they accurately indicate the relative populations at different birth dates).

Here is another way of looking at the same information, once again using the animation published by the Office of National Statistics. (The graph was plotted using values at intervals of 5 years). Percentages after 2012 are estimates. 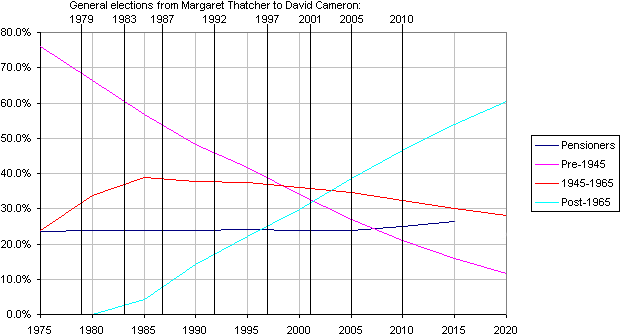 This article complements “The myth of excessive political influence by the post-war generation“.

It is clear from the lighter shaded region of each graph that there has never been this mythical generation whose mere size caused governments to unduly favour them, or which could commandeer national resources at the expense of other generations. That is typically a conspiracy hypothesis propagated by people who are envious of the successes of a minority of the post-war generation, yet weren’t around to see the struggles of much of the generation. But it is also propagated by rich people on guilt trips.

Although Tony Blair and Gordon Brown were born within the range 1945-1965, the average age of members of Parliament is typically about 50. None of these factors appears to have favoured the 1945-1965 cohort.

Another group who some people think have had an undue influence on policies because of sheer weight of numbers are pensioners. For most of these Prime Ministers above pensioners have been 23%-24% of the electorate. Then there was a rise to 25% after 2005.

It is estimated that pensioners  will be a little over 26% of the electorate in 2015. After that new pension-age rules will reduce the rate of increase, but new data on life expectancy will probably increase the estimates.