Here are the comments I promised. (I’ve provided a review at Amazon.co.uk too).

This book is unashamedly a polemic rather than an unemotional analysis. This provides the emotional energy to carry the topic, and no doubt resonates with many young people today. It is a rallying cry for “something must be done!” (And perhaps “heads must roll!”)

But more analysis would have revealed that things are not always as stated, and seeking solutions (rather than debating problems) needs a more focused identification of underlying causes so that they can be fixed. The book is better at casting blame (sometimes wrongly) towards the past than at proposing solutions for the future. (I’m speaking as someone who did a lot of analysis of social issues during my career and afterward).

“Jilted Generation: How Britain has Bankrupted its Youth”

The book talks of its generation being cast aside. The word typically means “loved then discarded”. Perhaps that it how it feels.

But was any other generation “loved but not discarded”? I think people in earlier generations had lower initial expectations and so didn’t feel such a loss whenever it was a case of “life’s a bitch and then you die”. This is a problem with any assumption that each generation will be better off than the previous one; why should people assume that? If the life-features of generations are a combination of trends + luck, then “regression to the mean” will typically make some life-features worse in the next generation!

“Generation” really only means much within a family. It is a poor way of talking about a set of people born over some 25  year period (or whatever). There is rarely a fully plausible definition of the generation, nor do all the identified people have much in common.

The generation of this book is the one born after September 1979, because that identifies those who had to pay more to go to university. For a minority of people that matters a lot. But nearly two-thirds of this generation didn’t go to university, so this distinguishing factor is irrelevant to them! This is also the generation of most Premier League footballers and their WAGS, and of most of the Olympians and Paralympians who are the British heroes feted in the recent New Year’s Honours list. Lots of people are fond of some of the members of this generation! 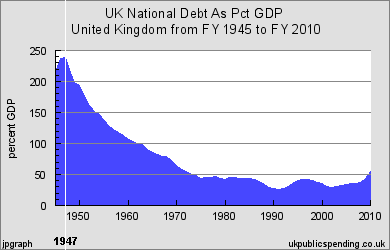 UK national debt as a proportion of GDP

It is nonsense to say (for example) that “children are born broke“! (Most people would find it hard to identify what impact the national debt has on their lives). Important questions include “how much interest is paid on the debt”, which in effect is a leakage of tax-payers’ money, and “how much does the size of the national debt constrain the policies of government”, (by internal or external forces), which could be policies relevant to any or all generations. To be fair, the book does discuss those.

“The Next Normal: An Unprecedented Look at Millennials Worldwide”

The book makes some stereotypical statements about a baby-boom from about 1945 to about 1965. It modifies them, for example using a diagram from the Office of National Statistics to talk about a ‘first-wave baby boom’ between about 1945 to 1952, rising again only between the the years 1956 and 1965 in the ‘second-wave baby boom’. But the earlier spike was actually smaller, and the “second-wave” was from about 1955 to 1974: 1965 was the peak of a baby-boom, not the end of one! Later the book says “by the time the last of the baby boomers retire in 2030 …”. But once again that falsely assumes that 1965 was the end of the baby boom: the last of the 1955-1974 baby boomers will retire about 2040. See:

Accompanying these errors in the demographics is inconsistent blaming of the baby boomers (whoever they are!) For example:

“We know that our parents didn’t want it this way; we know that when they accepted the terms of their society they were only trying to do what was best for themselves and their families. But we also know that they could have done better if more of them had remembered that they weren’t just individuals but citizens too”.

What on Earth does “they could have done better if more of them had remembered that they weren’t just individuals but citizens too” mean? Assuming that this is supposed to be about me too, what should I have done that I didn’t do? What did I do that I shouldn’t have done? That statement is abstract waffle, not grounded in the real actions of real people living a real life. I suspect it is based somehow on the assumption that we had at the time at least the knowledge that the authors have with hindsight, plus our hands on the levers of power. Hardly any of us had such power, and none of us had such knowledge.

I found this one of the most interesting parts of the book. It has caused me to revise a statement I have made a number of times that only 1% of us had our hands on the levers of power. That is optimistic; I now think less than 0.1% of us did!

I now see that all government is an ongoing experiment! The situations that have to be catered for have never arisen in the same way before. There is no rule-book that is known to work. Prior ideologies were probably designed (perhaps only in theory) for previous cases. Much of the time, politicians, who don’t really understand one-another fully and haven’t got time to negotiate with everyone concerned, make things up as they go along. Arrogance (or impatience or ignorance) prevents the running of controlled experiments.

Furthermore, things that may have been easy to give are hard to take away later. It is almost impossible to make a fresh start with a particular topic, but instead “course corrections” (hopefully “corrections”!) are made to existing policies, and then sold as new initiatives. It looks like bad management, but the media and the public are partly to blame for this. “U turns” are condemned; programmes on which money has been spent tend to continue too long (the “sunk cost fallacy”).

In the late 1990s I was one of the business analysts studying the welfare state in preparation for potentially replacing its core IT systems. It was obvious to us that the benefits system was dysfunctional and vast simplification was needed. It was also obvious that it would never happen: to be even barely acceptable to voters and lobby-groups it would cost the Treasury lots more; and since the Treasury wouldn’t pay out, it would never be acceptable.

Then Ian Duncan Smith proposed the Universal Credit, which was exactly what we had known was needed! But it would surely still be impossible to get past the Treasury, and anything acceptable to them would fail with the electorate. Yet – it still survives (trimmed a bit), and hopefully will become law! It is the sort of “once in a lifetime” opportunity to sort out the mess resulting from incremental “politically acceptable” evolution that is needed more often. But it is nearly-impossible to achieve these, and typically a kludge gets added to a botch and interacts with a cock-up that has become embedded in society. (I am probably in a very small minority of people who are confident that we really do need the Universal Credit!)

Prospect theory tells us that the negative emotion of losing something is about twice the positive emotion of gaining it in the first place. Things that could have been omitted at first without too much fuss cannot be removed later without lots of fuss. Policy making can never be a purely rational activity, except with hindsight!

Why lump housing, jobs, and children together? Because they all involve life-style choices, some of which make life harder for the people who make particular decisions.

Taking myself as a sample of one:
My sister and I lived with my parents in a small 3-bedroom council flat in a concrete council estate in Birmingham until I graduated. (I had 3 jobs in all during university to help my parents pay for my education). My chosen job was a long way away, so for the first year I lived with my parents at weekends then commuted to lodgings near my job, where I shared a bedroom with (initially) strangers during the week. (Once I had finished at university, my parents in their 40s could afford to buy their own house). Then for 6 years I shared rented houses with relative strangers, but with individual bedrooms. Then I stepped onto the housing ladder by buying (with a mortgage) a grotty 2-bedroom semi-detached bungalow on a grotty estate. My ladyfriend moved in with her daughter, and the three of us lived in those 2 bedrooms for several years until we moved up the housing ladder. After many years, we separated and I bought a cheaper house and became childfree (my preference) again. Every house was chosen to be near enough to my job as the latter moved around.

There is a theme in this book about being able to live near where people were brought up (even in the South-East!), and wanting a family but having to delay it until a family-house can be afforded.  While those are obviously desirable to those concerned, they are certainly not all necessary. I feel that the authors are setting the bar too high, and getting angry at failing to achieve “modern” expectations that some people in earlier generations never had.

I accept the consensus that there are too few houses. I accept that jobs are hard to find. I accept that this makes having children harder. But my sympathy is limited where people constrain themselves in ways that I didn’t.

Warning about simple age comparisons:
The housing problems of younger people are often expressed in terms of their typical ages. But they should be expressed inter alia in terms of the average time since the end of full time education. In 1965, the average end of full time education was a little over 15, while nowadays it is about 19. This would be expected to increase the average “first-house age” by nearly 4 years over that time. It isn’t valid to be concerned about the higher “first-house ages” of younger people without accounting for such factors.

There have been many incompetent PFI contracts. The book rightly condemns those, but it goes too far in condemning the principle of PFIs just because they pass on costs to people in future.

“from the golden rule perspective . . . intergenerational equity requires . . . that the costs associated with . . . expenditure should be spread over time in accordance with the distribution over time of the benefits that they generate.”

Now ask “how should this be achieved for the 105 contracts for schools that are currently handled via PFI?” In fact, PFI is already a close approximation to this principle! If a school is run under a PFI contract for 40 years, then the people paying for it over this time are likely to include parents whose children are going to those schools. Under this “golden rule perspective” it would be wrong for the cohort that created the school to have to pay for it all.

Just a couple of points: