These are comments on “Spending Power Across the Generations” by David Kingman, published on 23 January 2013 by the Intergenerational Foundation. I was directed to the report as follows:

So a more accurate title would be: “Some recent trends in spending behaviour by different age groups”.

I was working on this section before I knew about this report. I’m publishing it here because this report is mostly an example of the first way of comparing generations below, not the second way. (However, the report also adds “trends over about 10 years”, and these diagrams do not deal with trends).

A rather uninformative way

It is easiest and tempting (especially for younger people observing older people) to compare different generations at the same real date, for example 2013: 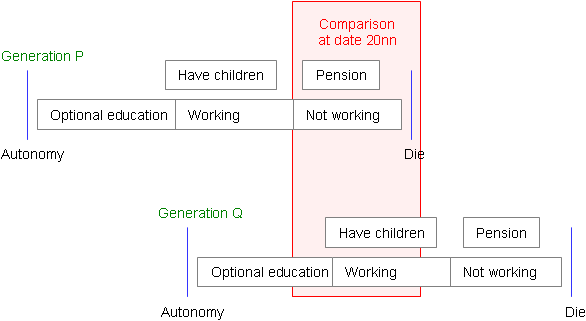 The obvious problem is that people in the 2 generations are at different life stages, and however fair the system is the comparison will show massive differences. That is life! Trends will be different for different generations if only because some changes matter only to one generation and some only to the other. (A change to the cost of end-of-life care only affects Generation P while a change to the cost of education only affects Generation Q).

Perhaps the main valid use for this sort of comparison is for marketing purposes, deciding what products to make and how to promote them. 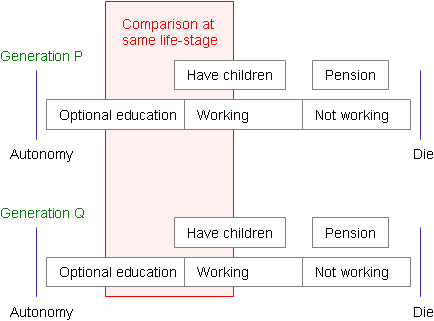 But while this may defuse some resentment, the differences are likely to be so wide-ranging and dramatic that few lessons can be learned. And how many young people really care about the early struggles of people decades older than them? They have their own current problems, and may lash out verbally in frustration and anger anyway.

Comments on “Spending Power Across the Generations” by the Intergenerational Foundation

These are comments on “Spending Power Across the Generations” by David Kingman, published on 23 January 2013 by the Intergenerational Foundation.

I believe for the reasons below that the report doesn’t make its case. Whether or not any of its assertions and conclusions are true needs information and analysis not included in the report and which may not even exist.

This is not a trivial point, because over time an “age group” behaves very differently from a “cohort”. The individuals in a particular cohort stay the same (except for dying), while the individuals in an age group are a fluid set. This can have important, and sometimes counter-intuitive, consequences:

One consequence of the use of age groups instead of (generational) cohorts is that statistics about the age group over time do not necessarily reflect the life-experiences of the individuals passing through that age range. This is important for this report because it shows trends over about 10 years.

A personal example: throughout much of my career I was something of a workaholic. Despite (then) being a highish-rate tax payer, I spent little on those items, partly because I simply didn’t want to spend my time on them. (I didn’t learn to drive until my early 30s so the “driving and petrol” item wasn’t directly relevant. I bought my first car out of income. I bought my latest car at 63 out of life savings). Now that I’m 65 and retired I still spend little of my income on them, preferring to spend my time and money on such things as house improvements and my main hobby (photography).

The inclusion of these 4 items says more about the interests of the author of the report than about society as a whole! They are not all the “important categories” he claims. Obviously “food” matters, but not “dining out”. Surely “savings and pensions” have to be included? Clothing and footwear, recreation and sports, household goods and furniture? And gas, water, and electricity, all of which have a discretionary element. “Transport” would be a better item than anything implying possession of a motor car, and to be fair the report does include public transport. And the magnitudes of this spending and these trends matters a lot, for example:

(Note: I’m not denying the possibility that there is a causal relationship between actual spending power and these spending decisions; simply that the report itself doesn’t make the case).

The report concludes “This analysis supports the view that the older generation have enjoyed more favourable economic conditions during the first part of the 21st century”. I wish! It has economically been the worst decade of my adult life. But now that 38 years of mortgage payments are over, and I’m willing to spend my life-savings, and I’m getting my state pension, I’m comfortable. Appearances can be deceptive.

Using the “checklist for intergenerational unfairness”

1. Is there more than one generation?

There are lots of age groups rather than generations, but I won’t quibble. The report has something to say relating to people of different ages.

Is it concerned with “relationships between children, youth, adults and seniors, particularly in terms of treatment and interactions“? Is there an element of cause and effect?

No. I don’t think the word “intergenerational” should be used about this report. (There is only one insignificant use within the text: “Restaurant bills also proved to be weighted intergenerationally”. But the report is published by the Intergenerational Foundation which is cited throughout it).

The report doesn’t identify by analysis what fair numbers would be. Therefore it cannot be said whether the trends imply unfairness. They may just be things the author doesn’t like.

4. Have the people concerned been consulted?

Apparently not. Their spending was sampled, but not their reasons.

My comments on this report are similar in several ways to those in “Commentary on “Intergenerational Fairness Index” by the Intergenerational Foundation“. This probably arises from a failure to start with a properly formulated hypothesis, then, in addition to identifying what supporting evidence is needed, to identify what evidence is needed to refute alternatives. This failure makes the process more like theology or ideology than science.

It is hard to deduce a person’s spending power from the narrow set of items covered by this report. There are too many other things that people may or may not spend their money on. (I don’t use a mobile phone except for emergencies, or have a smart phone or an iPad or mobile computing of any sort, in spite of being a webmaster for several websites, blogs, and social media accounts). Priorities change over generations.

The large variety of age ranges covered in the report gives the impression of having to grab whatever data can be found, rather than using data specifically to test the hypothesis.

I believe this report is really about:
“Some recent trends in spending behaviour by different age groups”.