Previous posts have provided graphs of the proportions of various groups in the electorate:

I want to publish a graph with two more age groups plotted, because these groups are discussed either alone or in comparison with other age groups. It is often unclear in discussion whether it is a general age group at a particular time or a cohort defined by birth dates that is being discussed. Here they are age ranges; obviously their members currently overlap a lot.

Rather than update those earlier posts, I’m publishing an extended graph below. This graph is a super-set of the others; the plots for the previous 4 groups are unchanged: 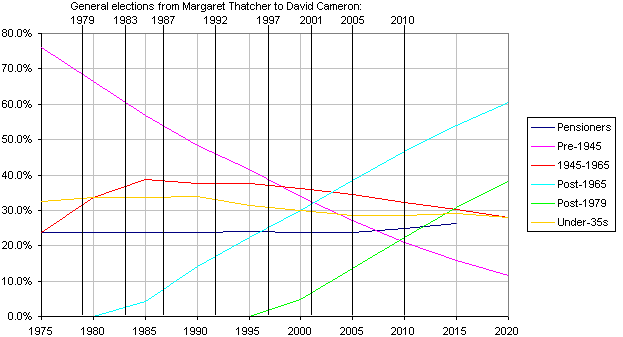 The reason for publishing a graph of the percentages of these groups in the electorate is to enable the potential extent of their political influence to be discussed. But (as with the 1945-1965 cohort myths 2 & 3) the political influence of any age group or generation or cohort is often greatly exaggerated and mis-understood.

People under the age of 35:
Because I’ve treated this as an age group rather than a generation or cohort it only changes slowly over decades. It has been a larger group than “Pensioners” for many decades, but this may change after about 2020 because the trends of these two groups are in opposite directions. By 2020 it will be slightly larger than the 1945-1965 cohort, but it will be nearly the same even before then.

My difficulty (mentioned above) in deciding whether “generation” discussions are about age ranges or cohorts or something else is similar to a criticism of Jilted Generation by James Wilhelm in  Intergenerational Justice Review 2012, issue 1 (Page 29). “Given the singular importance of the “generation” concept, a more rigorous discussion and justification for this choice would have been welcome in the opening chapter. Although a few supportive graphs with accompanying commentaries are utilised, a reasoned discussion of why the specific definition of the “generation” concept was adopted does not feature.”

(Once again I’ve used the animation published by the Office of National Statistics. The graph was plotted using values at intervals of 5 years. Percentages after 2012 are estimates.)

57 Responses to “Percentages of various groups in the electorate – extended”