I live in Stockport and I am often surprised about housing costs (buying or renting) being quoted. I “sort of” knew that London and the South East are more expensive. This article collects together some information revealing some big differences.

My view now is that London is such a special case that it should always be analysed and quoted separately. The impact on people, and the policies that might be needed, shouldn’t be lost by considering only broader averages such a “region” or “country”. The experiences of people in London can’t be generalised to England or the UK, and English or UK averages don’t reflect the specific problems in London.

(Caution: different sources give different numbers, and all the numbers vary significantly over time. But in all cases London stands out as a special case).

Buying and renting costs, London versus next biggest cities

The heights of the columns are relative to London’s, which are therefore 100%.

The average percentage of households owning their own homes (often with a mortgage) is less than the nearly 80% of some older cohorts, and various sources show that the percentage is typically dropping. The effect in London is much more pronounced than elsewhere. (From “Oxford Economics - Housing Market Analysis July 2011” 2010 values).

Other differences between London and the rest

Not only do costs differ between London and the rest, but average wages do too. These values are taken from “Changes in real earnings in the UK and London, 2002 to 2012” (Figure 1: Median hourly earnings excluding overtime of all employees, UK and London) published by the Office for National Statistics 2013.

Since this UK value includes the London groups, the UK value excluding the London groups is presumably somewhat lower. Once again, this graph reveals that London is a special case. (This graph does not take into account people without work).

Here is another major difference between London and the rest: Growth in output. 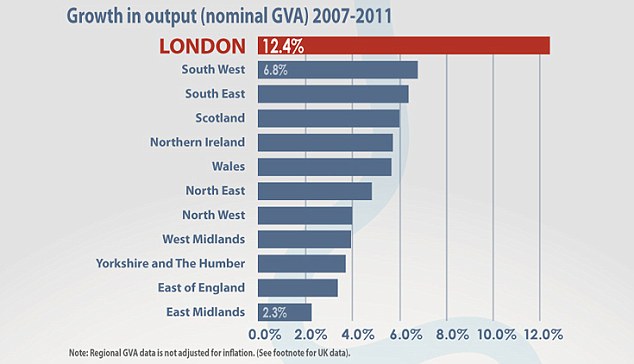 Even here, London is a special case, emphasising that analysis should represent London separately from the rest of the UK.

Other sources describing the “London versus the rest” divide

58 Responses to “Housing costs: London versus the rest”