I started this 3-part discussion because of the recommendations in the report “Our invisible addicts” by the Royal College of Psychiatrists about alcohol guidelines in the over-64s. They were wrong on a number of levels. Much of the literature on alcohol consumption suffers from one of the errors made by that report: there is a failure to see the issue from the individual drinker’s perspective. As I said in Part 2 (see also “The origins of the UK’s alcohol guidelines” in Part 1):

“Drinking guidelines are relatively arbitrary decisions made by committees for social engineering purposes. They do not relate to any specific drinker”.

“The various participants have their own separate agendas…. So drinkers, front-line health professionals, and politicians, can be expected to pull in different directions.”

Also in Part 2, I posed the following questions, concerned with individual drinkers’ ability to make their own informed decisions. I want to inject part of the drinker’s perspective into the discussion, so that such questions appear reasonable.

“If my alcohol drinking pattern and quantity is X, what is my increased mortality rate?”

“How much alcohol can I drink for an increased mortality rate of X?”

Terminology and the tyranny of the discontinuous mind

Richard Dawkins introduced the term “the tyranny of the discontinuous mind” in his super book “The Ancestor’s Tale”. It identifies problems with putting things into rigid categories when they would be better treated as continua. I think analytically; it was a necessary trait in a career spent (inter alia) helping to design complicated computer systems. I therefore run the risk of being such a tyrant myself, so I have to be sensitive to inappropriate categorisation. And drinking guidelines fall into this trap!

This is a typical dose-response J Curve, with the relative risk initially falling from the abstention level, then rising again, as alcohol consumption increases. I haven’t put more values on the vertical axis because there is no consensus, and it doesn’t matter for this discussion. 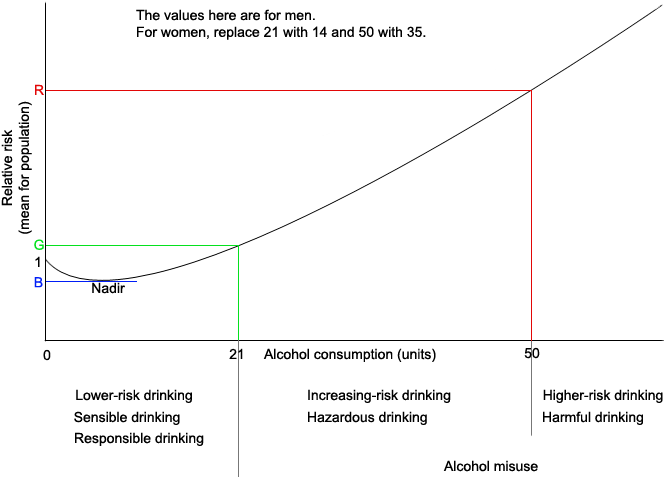 This particular terminology came from the following, but it is typical of many other documents too:

The green lines correspond to the UK’s drinking guidelines, at 21 units per week for men. So the consumption of 21 units per week leads to a relative risk of “G” (whatever that is). The guideline for women is lower, but the dose-response curve is different for women too. This doesn’t matter for this discussion.

The values were largely “plucked out of the air” decades ago; see: “The origins of the UK’s alcohol guidelines” in Part 1. A committee with different members on it would probably have chosen different numbers. (Why are the numbers for both men and women, 21 and 14 respectively, multiples of 7?) Other countries use different numbers, and have different sizes of unit. The UK numbers have since been tweaked by adding values for daily consumption, and extra numbers have been “plucked out of the air” to identify the “higher risk” category, but the weekly values have not changed. Even though the science is now much better than when the values were originally chosen, the above diagram shows why no scientific research can directly derive the guidelines.

Where should the lines be drawn? Why not choose drinking levels that give the same relative risk as “0″ alcohol consumption (abstention)? Or why not choose the consumption at the “nadir”, the point of lowest mortality rate (“B”, the blue line)? Those are the only values which are not relatively arbitrary. Typical research indicates that the guidelines are set at a level which gives a higher relative risk than both abstention and the nadir. They result in a higher mortality rate than alternatives.

What is the relative risk for the population, (or subsets of the population), corresponding to the guidelines? In other words, what is the value “G”, where the green line meets the vertical axis? Does anyone actually know? The government and health professionals are recommending alcohol levels that result in this particular risk: shouldn’t we at least know what risk of death they are recommending us to accept, and why?

Even if the guidelines were derived in a credible way from researched dose-response curves for the whole population, they would still not be “accurate” for individuals. People differ from one-another in their medical tolerance of alcohol, and any person’s tolerance changes at different ages.  I said in Part 2 (similar to this abstract):

“It would be unethical to advise any person to adhere to them [the guidelines] without investigating the physical and environmental conditions of that person first. It would be equivalent to advising medical intervention for someone without knowing about them.”

If these were promoted as population-based guidelines, that would at least be honest. But they are promoted as though they really do apply to individual drinkers. And this becomes worse when terminology is chosen to add “spin” to the values.

Since the values were “plucked out of the air” decades ago, they have taken on a life of their own. Terminology has grown up around them. You may stray from “sensible drinking” to “hazardous drinking” with just a few extra units a week, even though there is hardly any actual change in relative risk.

A particularly unreasonable term is “misuse of alcohol”, (or “alcohol misuse”, etc), to mean (inter alia) “drinking beyond the guidelines”. This is a judgemental term, for example “Alcohol misuse: The use of alcohol for a purpose not consistent with legal or medical guidelines“, (see: Alcohol misuse: tackling the UK epidemic, but there is similar use elsewhere). Presumably, given that the guidelines are for social engineering purposes, it is necessary to cause people to act en masse whether they individually need to or not.

This is also sloppy logic. “Misuse” of something can credibly only be defined in relation to “proper use”. So what is “proper use of alcohol”? Let’s discuss that!

Proper use of alcohol

I’m ambitious; I intend to derive a plausible definition of “proper use of alcohol”! But first it is necessary to examine alcohol from 3 perspectives:

Perspective 1: Alcohol is a poison (or a sin)

This is sometimes a religious view. But it can also be a “puritan” view, without necessarily a religious influence. See: Alcohol as evil – Temperance and policy (Stanton Peele, 2010)

Without qualification, this view has no merit. I won’t waste time refuting it here, other than to point to the other 2 perspectives below which are incompatible with this view. However, this view appears to be the implicit basis of lots of documents on alcohol policy. They often start with a sentence something like “Many people enjoy drinking alcohol, but ….” then continue for dozens of pages as though the policy should be to eliminate alcohol from society because it has nothing going for it!

Perspective 2: Alcohol is a preventive medicine with significant bad side-effects

This is a major theme of Part 2, for some but not all illnesses. It especially appears to be a valid view for older people. It is validated if the “J Curve” above is the real dose-response curve for the population as a whole. Very many science papers says this is true, but a few are skeptical, or at least say that the bad side-effects out-weigh the prevention.

I think there is too much science at the biochemical level showing how this prevention works for this view to be dismissed.

Perspective 3: Alcohol is a quality-of-life enhancer with various significant side-effects

This view sometimes appears to be overlooked by governments and front-line health professionals! But it has been known by lots of people in lots of countries over lots of centuries. Since I know it is true for me, and by empathy I realise that others are probably telling the truth when they say it is true for them, I accept this view. (Who can judge “quality of life”? The person living that life is the final arbiter!)

Purposeful use of alcohol

Perspective 1 can safely be dismissed. Perspectives 2 and 3 are reasonably compatible with one-another, and can be combined into a comprehensive view of drinking.

Purposeful use of alcohol is to help prevent (or delay, or reduce) various illnesses that the drinker needs to be concerned about, and/or to enhance the quality of life measured over a substantial period of time (not just for the duration of the immediate effect).

Proper use of alcohol

Proper use of alcohol is use of alcohol to help prevent (or delay, or reduce) various illnesses that the drinker needs to be concerned about, and/or to enhance the quality of life measured over a substantial period of time (not just for the duration of the immediate effect), while eliminating unnecessary bad side-effects and any conflict with the law.

Why “Our invisible addicts” is wrong about alcohol consumption

The alcohol-guidelines part of the report “Our invisible addicts” by the Royal College of Psychiatrists is like a fart in a lift – it is wrong on many levels:

Risk of death and quality of life

Much of the attitude towards alcohol consumption is about the risk of death posed by alcohol. This risk of death is seen by many people as something to be avoided, even at considerable cost. Yet see: Assisted suicide – time for change. I want the law changed so that I have the option of taking a drug that carries a 100% risk of killing me in minutes. I want this option as an alternative to living with an unacceptable (to me) quality of life. Any analysis of the risk of alcohol consumption that doesn’t consider the effect of alcohol on the quality of life is potentially worthless. Living longer isn’t the most important objective of life.

Given that I am prepared to make a trade-off between quality of life and length of life, (and so are lots of other people), we should have available the information we need for this. See the questions posed in the Preamble at the top of this article.

I suspect some of the information needed is out there. See: ‘Optimal’ levels of alcohol consumption for men and women at different ages, and the all-cause mortality attributable to drinking (Ian R. White, Dan R. Altmann and Kiran Nanchahal) (2006):

“We investigated the levels of alcohol consumption at which risk is 5% more than risk at the nadir. This may correspond to an acceptable increase in risk for an individual, although a 5% increase in risk for everyone in England and Wales would imply 27000 extra deaths each year….