This is the 1st of a 2-part attack on some myths about the baby boom and the impact of baby boomers:
Part 1: This article: The myth of the UK baby-boom
Part 2: The myth of a baby-boom-led housing crisis

David Willetts wrote “The Pinch: how the baby boomers took their children’s future – and why they should give it back“. Near the start he identifies what he is talking about: “The boomers, roughly those born between 1945 and 1965 …” There are a number of other books on the topic of the baby-boom generation, and there have been many articles in the media. The baby-boom influences government policy, for example on pensions and long-term care of the elderly.

But anyone who believes all of that is wrong! There isn’t a baby-boom that started just after the war and continued for many years afterward. People haven’t bothered to look at the details of birth rates in the post-war period, or else ignore the facts that shout out from graphs. The truth would be inconvenient for those wanting a simplistic reason for any inter-generational financial incompatibilities we see in the UK.

Others have spotted the myth. For example:

Here is an extract from “The UK population: past, present and future“, figure 1.13 on page 11. I show just the females, but the numbers for males are about the same. I have rotated it and added some text for clarity. It isn’t showing the numbers of births for each year; it is showing the people who survived until 2004. So the actual birth-rate was a little higher for the older population, but some didn’t survive until 2004. (A very useful animation to study this is now available). 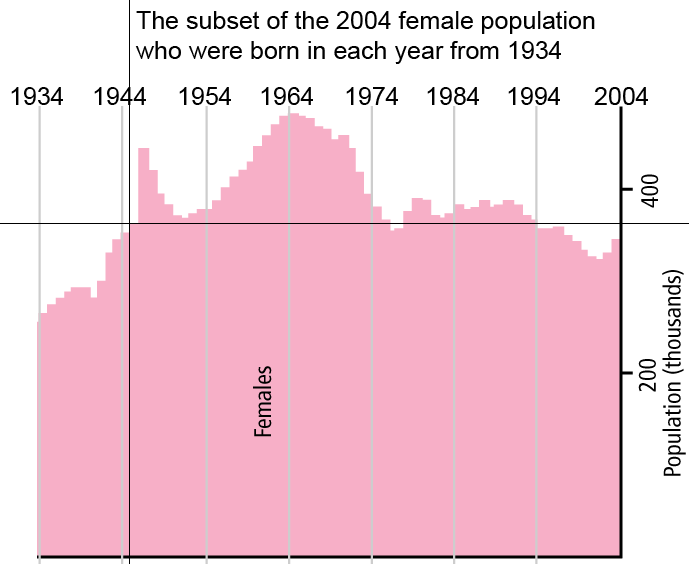 The conventional theory, as stated by David Willetts but also assumed by many others, is that the baby boomers were born from about 1945 to about 1965, although there are variations on the finish date for the boom. Here is the David Willetts version: 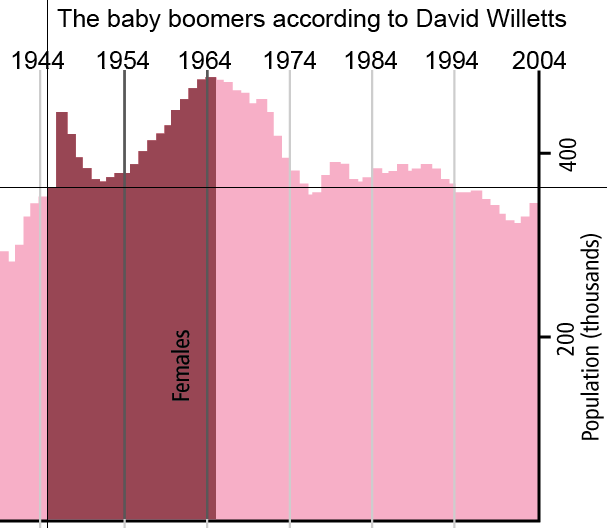 This illustrates the blind spot of so many commentators: they know that a baby-boom started in about 1946, but haven’t applied logic to the final date. This is because they think there is “a baby-boom”. If they adopt a final date of 1965 (or earlier) they are ignoring a huge boom still occurring between about 1965 and 1974. But let’s examine the theory that there are 2 totally independent baby-booms nearly a generation apart! 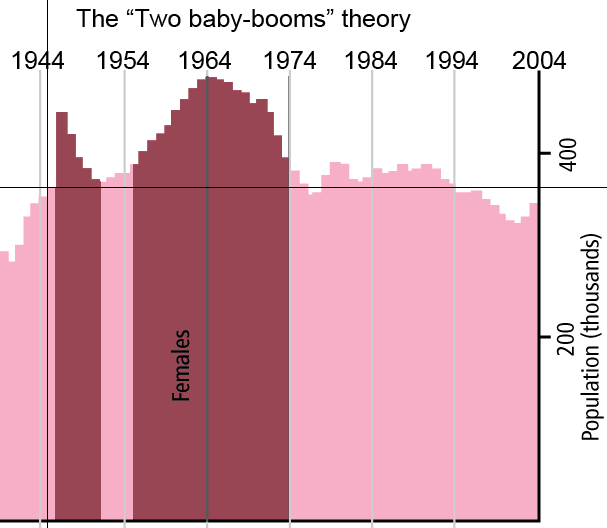 This picture saves me writing a 1000 words, and saves you reading them! Now let’s think about the vast differences between the 2 baby-booms.

Everyone agrees with the reason for this short spike in the birth-rate, and everyone is right. (My parents met during the war when serving in the RAF, and I was born in 1947).

Europe was devastated. The Marshall Plan to remedy this began in 1948 and finished in 1952. Rationing was still in force, and gradually ceased between the 2 booms. (Except for Suez!) The mind-set of the parents typically included “austerity” and “uncertainty about the future”. This had an effect on the early lives of many of the children concerned (including me).

The reasons for this boom were nothing to do with the war. The UK was gaining confidence in the future. (1957 was the date of Macmillan’s “You’ve never had it so good” speech). This was the period just before, during, and after the swinging 60s. “Austerity” (rationing and far more besides) was over before 1960. The mid-set of the parents was correspondingly typically very different from that of the parents of baby-boom 1, and the children grew up in a different world from that of baby-boom 1.

The Pill became available (in the UK) to married women in 1961, and to unmarried women in 1964. The 1967  Abortion Act allowed abortion in special circumstances. Presumably these all influenced the fall in the birth-rate in the last half of this baby-boom.

The women in this cohort (born after 1953) have the same State Pension Age and default retirement age as the men. This  cohort will start claiming State Pensions  about 2020, this process will peak about 2030, and fall away by about 2040.

Anyone who wants to understand the generational history of the UK since the war needs to recognize the existence of 2 baby-booms, not just 1.  It is sloppy to claim “the baby boomers took their children’s future – and … they can give it back”. Many of the cohort of baby-boom 2 had parents who are in the cohort of baby-boom 1! It is useful to think of the two cohorts as separate generations, although since the peaks are only 19 years apart, these generations actually overlap. (And there are arguments that there are more recent baby-booms!)

This is especially important when examining the “inter-generational conflict” implied by the Davis Willetts statement above, (the subtitle of his book), which reflects what a lot of other people think. When examining housing wealth, pension wealth, the impact of retirement and old-age care, the cohorts must be treated separately. Otherwise invalid conclusions will be drawn, and proposals to remedy any problems will be less effective.

I think the cohort of baby-boom 1 are typically more cautious about the future than that of baby-boom 2. I am in the first cohort, and I don’t think I took anyone’s future.

117 Responses to “The myth of the UK baby-boom”